A second time visit to the magnificent temple district, this time was way more personal and enriching compared to my previous visit which was from college. 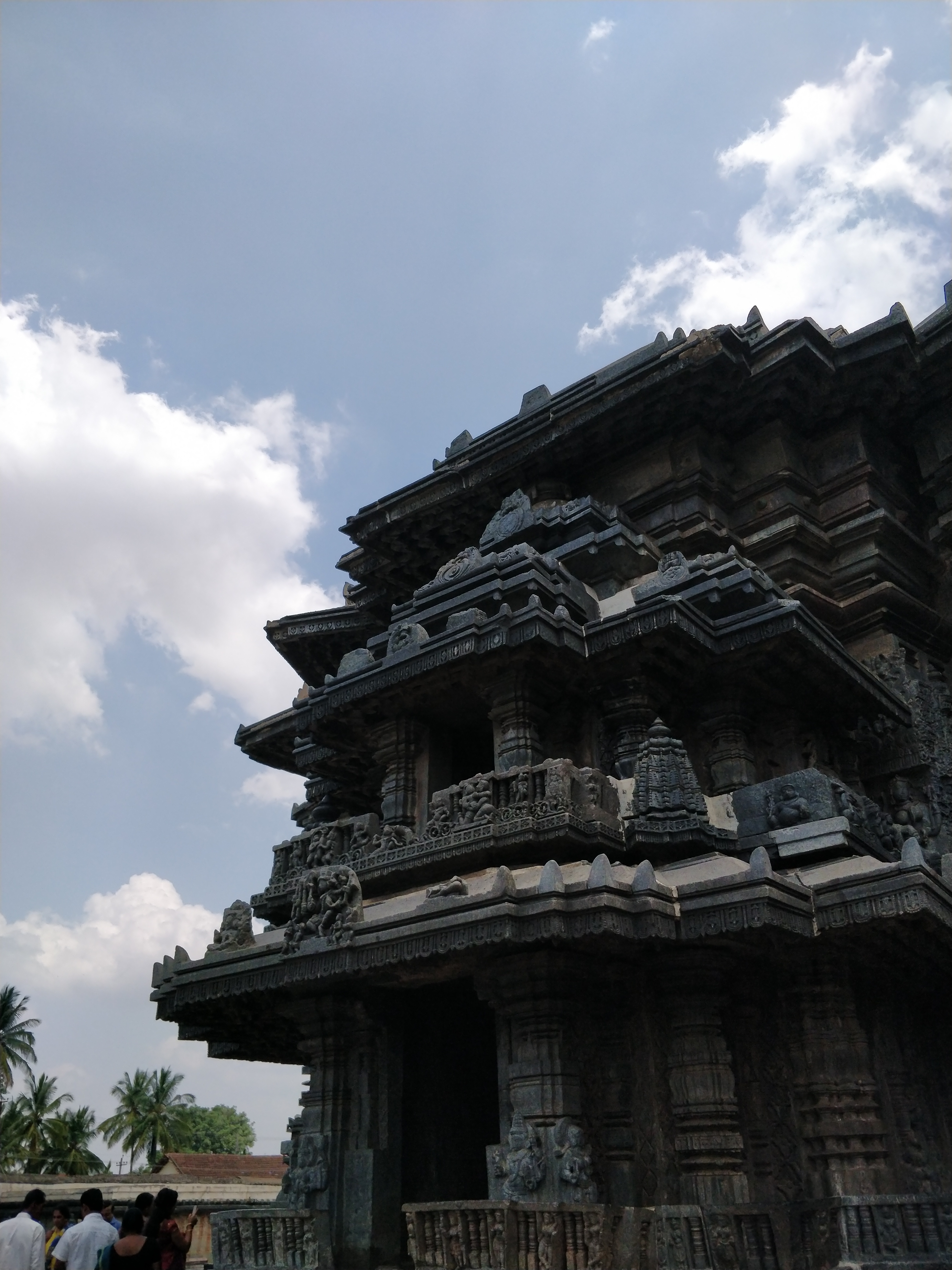 (I will only be talking about my experience and not the history of the place).

Belur lies about 220 km west of Bangalore, a 4-5 hour journey by bus. My travel partner and I believed we could complete the tour in one day, a challenge definitely. We took the Airavat semi-sleeper bus from Bangalore to Belur for 520 INR which was supposed to depart at 5.40 AM but departed at 6.15 AM.

Four hours later we were hungry and in Belur bus stand about 200m from the first place on our list, the Chennakeshava temple. Obviously food was a priority so that’s not where we went. We walked around till we found a decent looking Hotel Mayura. But turns out they stop serving breakfast at 9.30 AM (Really now?). A few blocks away we found Annapoorneshwari, a restaurant not so clean in appearance but served its purpose. We had some idlis and filter coffee before taking a walk down to the Chennakeshava temple.

A gopuram stands tall and majestic at the entrance of the temple campus where you’ll have to leave behind your footwear before you enter. I’d suggest wearing socks because the flooring stone gets unbearably hot in the noon. They have some carpets strewn across at a few places but even that gets quite hot. We were hopping around the whole time. The structure appears black and is made of soapstone which is unique to the Hoysala temples. 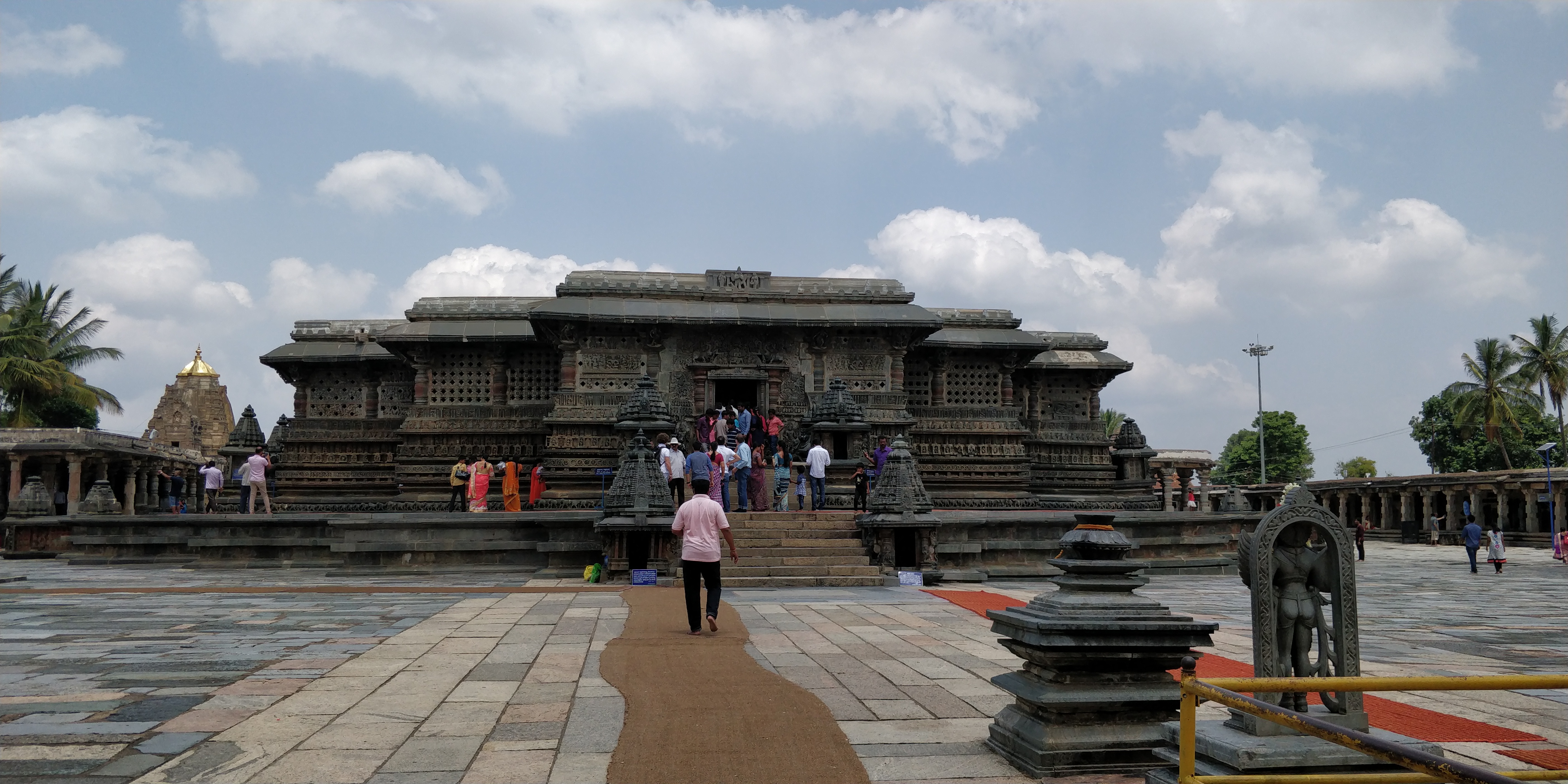 A quick parikrama later we stopped to click a few pictures of ourselves. We requested a few people to take one of both of us but were embarrassingly turned down. This seemed to be a trend that continued in the next few places funnily.

We took a local bus from the same stand to Halebid (16 Km away) by noon. The Hoysaleshwara temple is dead opposite to the bus stand which was a relief to our sore and burnt feet. The twin temple hosting two Nandi shrines and surrounded by a garden was a treat to the eye. We also noticed a few Jain elements in these structures.

While resting a while at one of the Nandi shrines, we noticed some interesting engravings on ‘interesting’ places.

A few kilometres from here was the Kedareshwara temple, we were told. We took an auto that dropped us off at Jain Basti instead. No regrets there. It was so different in detailing from the other two temples, yet similar in material and scale. The complex comprises of three Jain temples, a large idol of Parshvanatha, Shantinatha and Adinatha in each. 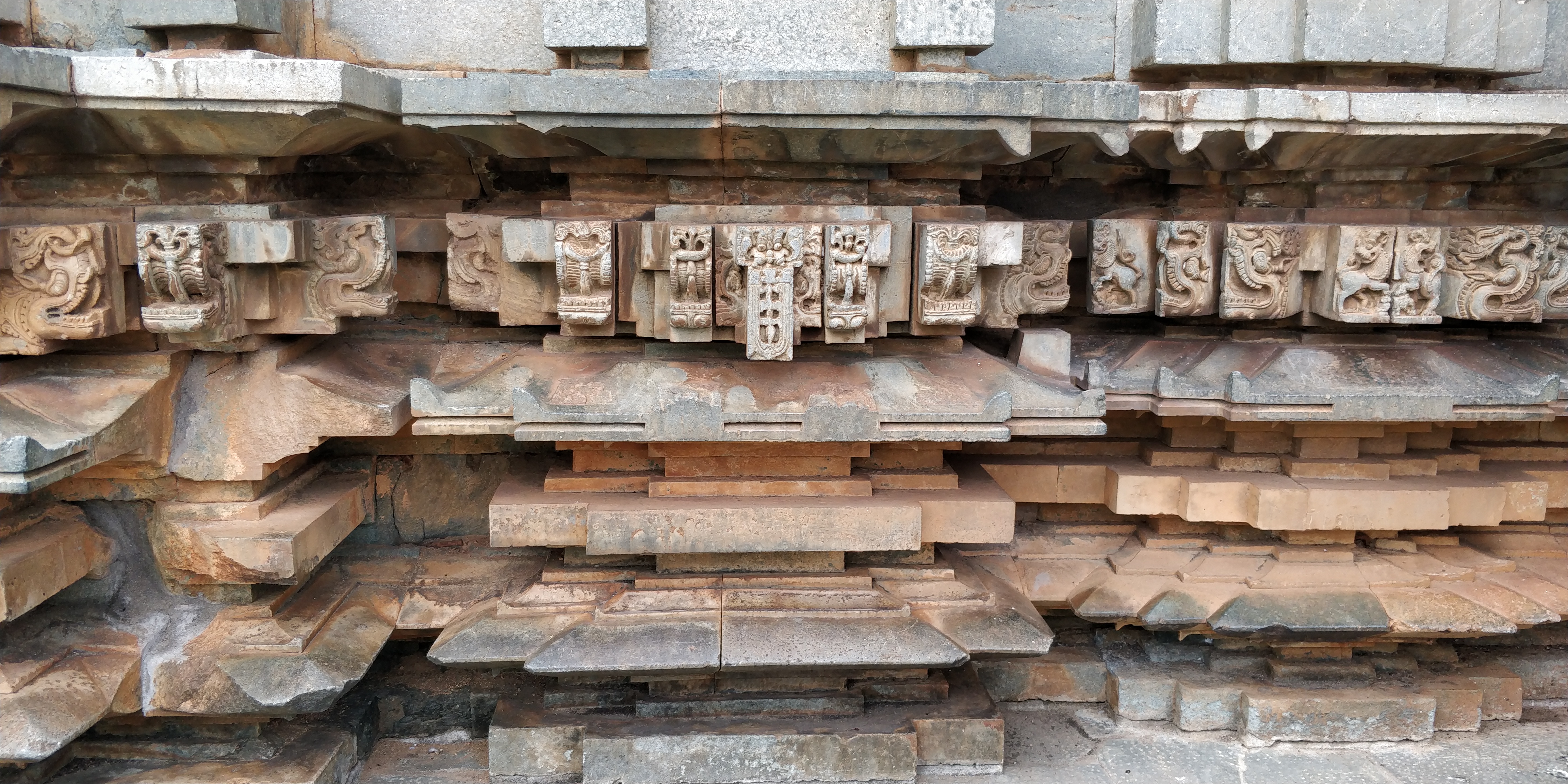 A short walk from the Jain complex was the Kedareshwara temple. 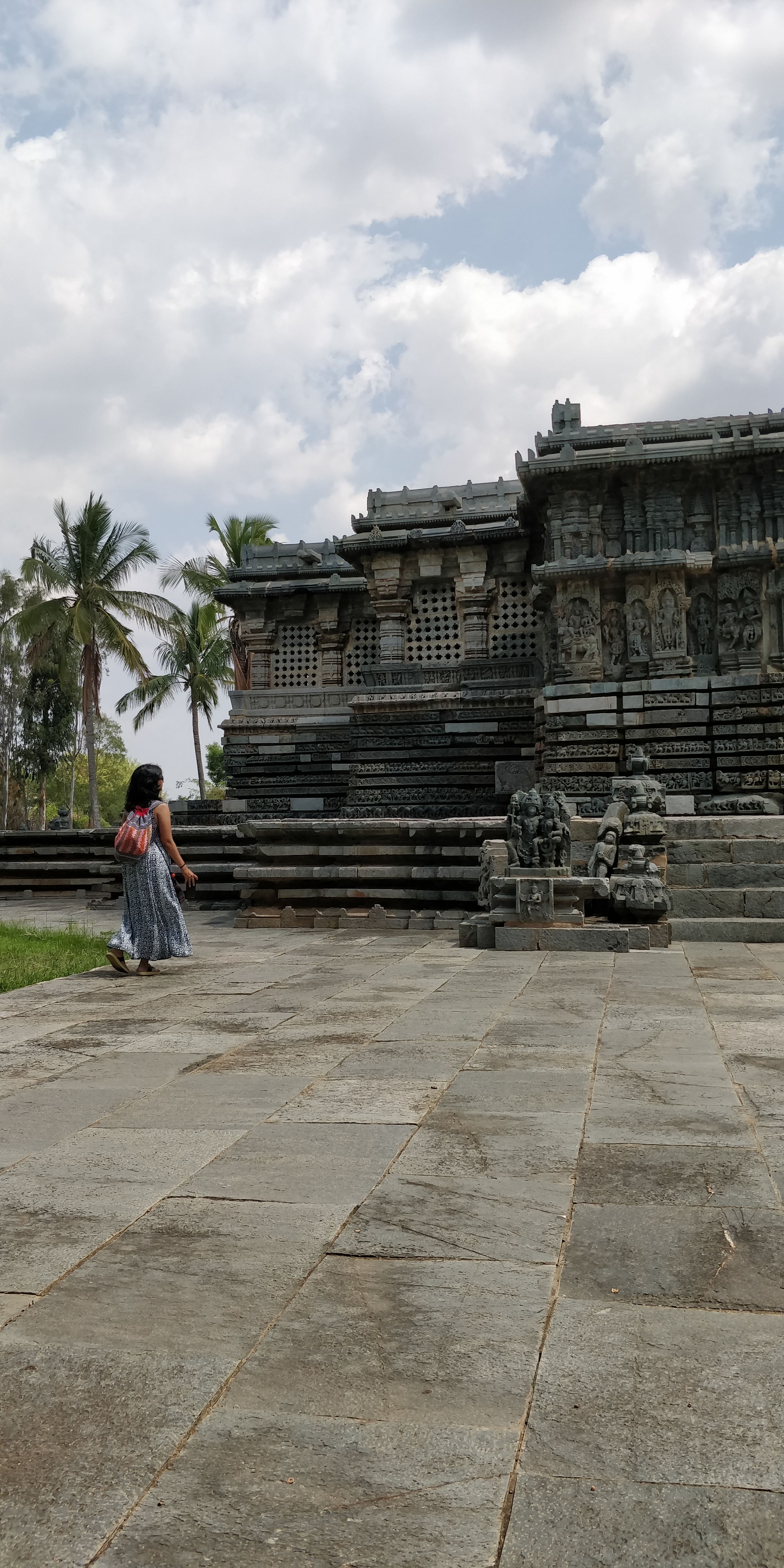 This temple, though intricately carved, didn’t have many visitors and remained closed. With solid walls on three sides, the temple appeared to be one large sculpture. After our parikrama here, we took a walk back to the Halebidu bus stand where we stopped to pour chilled water to drench our burnt feet in. Also came across some interesting sightings related to cows! 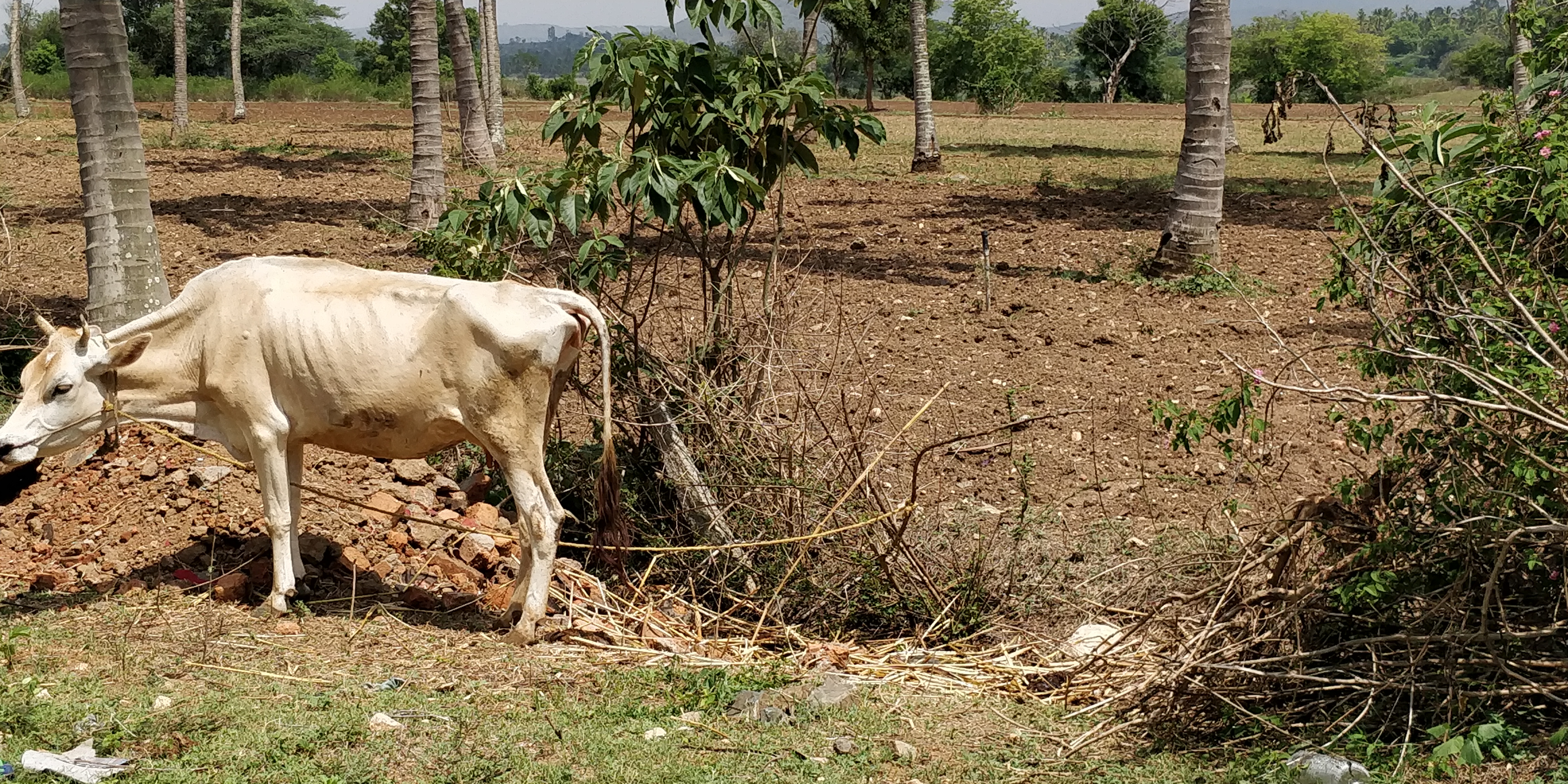 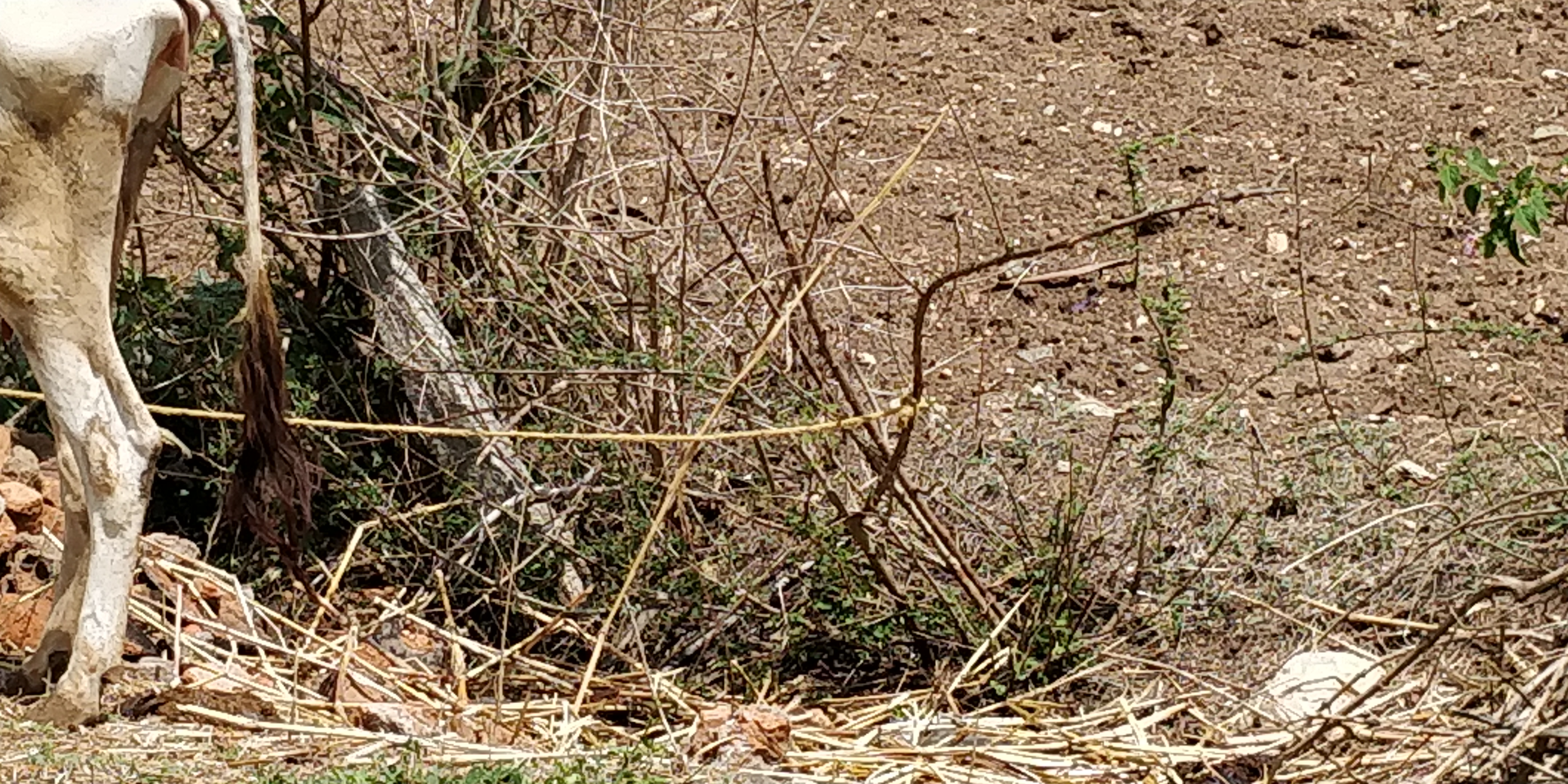 At the bus stand we took an auto to Belavadi (350 INR for both ways), being disappointed with the frequency of buses. Belavadi is a small village in the district of Chickmagalur. It’s said to be here that prince Bheema killed the demon Bakasura and protected the village.

Veera Narayana Temple in this village is magnificent with its three shrines and large span. We dedicated some time to resting our feet at one of the shrines while my partner sang some classicals. The acoustics were brilliant, I must say!

The same auto took us back to Halebidu around 3:30 PM.

We boarded another bus from Halebidu bus stand to Hassan bus stand. We were starving by now with no great restaurants in sight. Desperate to put some food in our stomachs, we picked up some samosas, puffs and chips from the bus stand Bakery. A little bargaining later, we got an auto to take us to Shettihalli and back for 390 INR. Which we realised was a great deal, halfway there! It’s about 40 km from Hassan (damn Bangalore auto drivers). 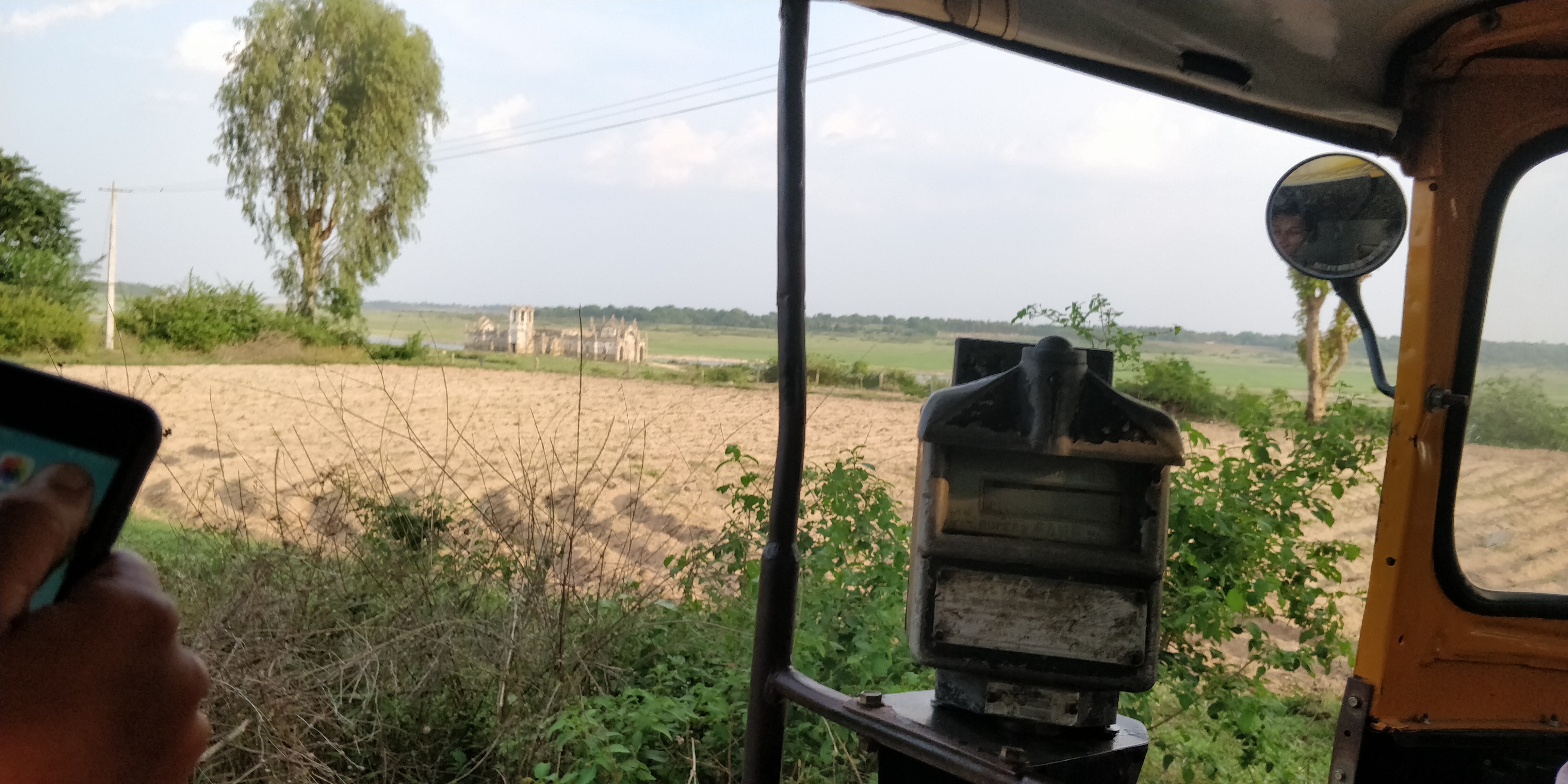 Rosary church was built by French missionaries for the wealthy British estate owners. It was later abandoned when construction of Hemavati Dam and Reservoir began. A glorious sight at sunset, we made it just on time.

During the monsoons, the lake is said to submerge the church partially, making it inaccessible but beautiful to view from afar. We spent about 30 minutes here soaking in the beauty and capturing whatever we could before the sun began to set. 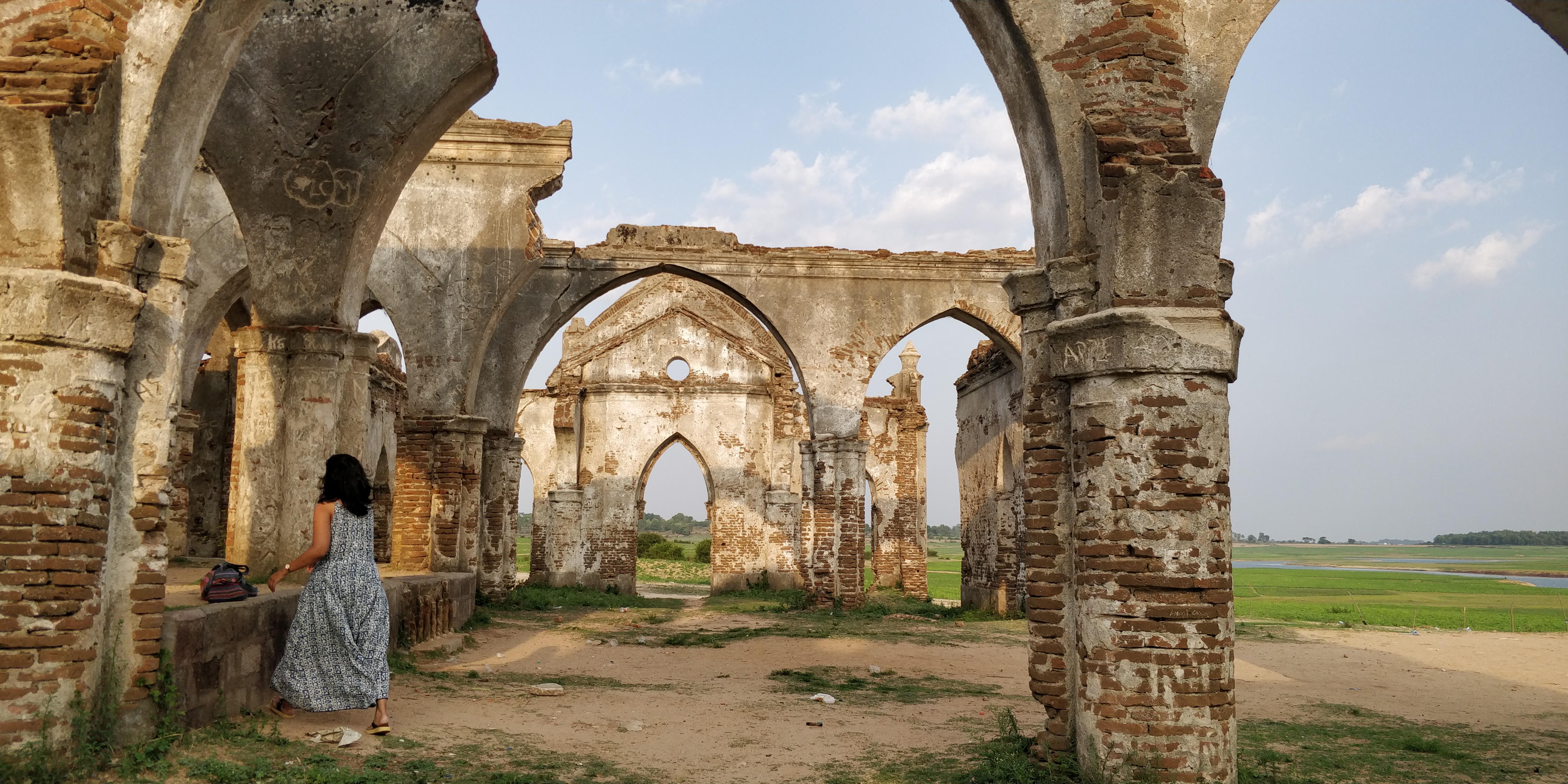 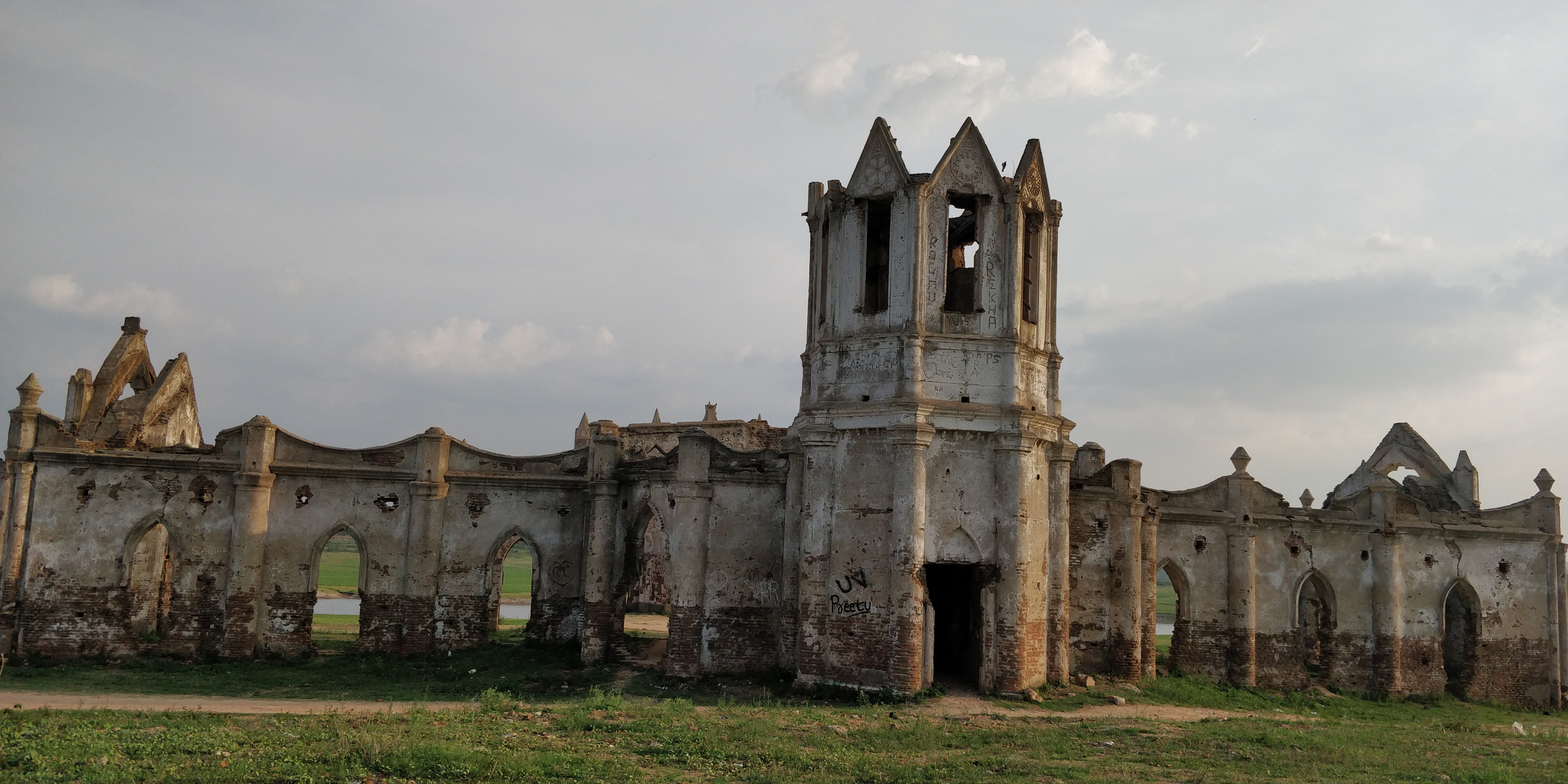 We saw a lot of tourists here who had travelled in their cars some of which were stupid enough to park it right in the middle of the church!

The auto guy waited and took us back to Hassan Bus stand (a new one). We reached back by 6:45 PM and boarded a regular KSRTC Bus to Bangalore almost immediately (bus ticket was 193 INR) Reaching us to Bangalore at 10:30 PM.

The Places we visited were so beautiful, but I must warn you that the people weren’t very friendly or mannered with the tourists. We had a couple of odd experiences around there.